Maison Callot Sœurs was opened in 1895 by four sisters: Marie Callot Gerber; Regina Callot Tennyson-Chantrell, and Joséphine Callot Crimont. Sœurs (sir) means “sisters” and I find it interesting that all of the sisters in the business were married, as married women of that era seem to have been typically restricted to adorning their own homes, rather than founding fashion houses. Perhaps their career-minded lives are explained by the fact that they had all been taught to sew by their mother, a lacemaker. Apart from that, they had no other formal training. Their initial designs utilized antique lace and ribbons to enhance blouses, but soon they started creating day and evening wear, which was such a resounding success that, by the turn of the century, they employed 600 workers.

In the early 1910s, their clothes were perfectly in tune with the vogue for Orientalism. Aside from their extravagant evening wear, they also continued to make pared-down versions for more conservative customers (often inspired by 18th-century dress), marrying the latest fashions with a timeless elegance.

They were among the first to use gold and silver lamé for dresses and their designs often featured exotic details – especially embroidery, the house’s speciality. Callot Sœurs were known for their crafsmanship and their attention to detail, and their rightfully set a high standard in the industry.

In the first decade of the new century, they were pioneers in devising comfortable dresses that were designed to be worn without a corset. Their preference for unobstructed garments (for which they often took inspiration from non-Western dress) made them fashion superstars in the 1920s when elite customers coveted their simple, yet exquisitely cut and draped sheath dresses. They often draped fabric directly on the body when creating patterns, and were promoters of bias cutting. Indeed, Madeleine Vionnet, the queen of the bias cut – who trained at Callot Sœurs – claimed that she owed her knowledge and success to the excellent and innovative instruction that she received while at the maison.

The house expanded and opened branches in Nice, Biarritz, Buenos Aires, and London, where it attracted the custom of royalty and society ladies. Aside from their richly decorated sheath evening dresses, they were especially known for their capes and capelets. In 1920 they created the manteau d’abbé (priest’s cloak), a short cape worn over coats and evening gowns that remained a fashion for nearly two decades.

During the first decade of the last century, their clothes were characterized by a tasteful palette of pastels, but by the 1920s they were using vivid Fauvist colors, often enhanced by the application of embroidery or beading. The sisters favored gold and silver thread and sequins, particularly on evening wear, because they caught and reflected the light when the wearer was dancing. 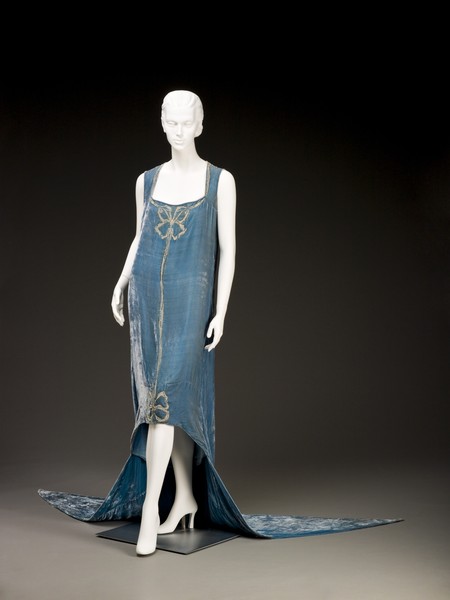 By 1926, the popularity of the house had started to wane because their intricate and expensive creations failed to compete with the sportswear promoted by Chanel and Poitou. The house was taken over by one of the sisters’ sons and in 1937 merged with Maison Calvet.

Patricia Gilbert is a French teacher. She's Canadian, lives in the United States, but dreams of living in France. Follow her on Instagram @Onequalitythefinest and on Twitter @1qualthefinest.
View all posts by Patricia Gilbert →
This entry was posted in Fashion and tagged French fashion designer, Maison Callot Sœurs, Orientalism. Bookmark the permalink.